Where it all Began

One day in 1967 Dave and his friend, Henry, decide to raft the Grand Canyon of the Snake. Even though neither young man has ever rafted the section, they look right at one another and feign expertise, "Of course, I’ve rafted this section. No problem."

4 miles or so into the trip they look down river and see the cresting, pulsing waves of a large rapid. Silence falls over the pair as they observe the series of 7 waves, each one peaking with 8-10 foot walls. Uncertainly, Dave asks, "Henry, what the hell is that?" Henry, equally amazed and ready to come clean, says, "Hell, I don’t know. I’ve never been here either!" Realizing there is no going back, Dave laughs and says, "Well, if we’re ever going to get our lunch, we’re going to get it right now!"

Reflecting on his first time through Lunch Counter, Dave says, "it was such a rush—an adrenaline rush. We looked at each other and both of us just started hootin’ and hollerin’. And I was hooked. I mean that was it." Dave effectively makes his office on the river and with Burt Reynolds starring in the movie, "Deliverance," the river rafting business is booming. People come from all over to raft the Snake and they don’t just want to just sit there, they want to be part of the action! The ‘70s bring paddle boats, wooden oars, May West Life Jackets, Green River Rafts, center mounted oar frames, the brilliant idea of boat ramps, lots of waves, lots of bailing water, and a whole lot of laughter. Bud and Kelly come to Jackson

25 years after Dave's first venture down the Snake we find a skinny, big dreaming 18 year-old named Bud Chatham. He’s a die-hard fly-fisherman who thinks a cutthroat trout rising for his caddis fly is pure poetry and he’s willing to do anything to spend a summer in Jackson. Bud begs his aunt and uncle, the owners of Snake River Park KOA, to let him spend his college summer cleaning bathrooms at the campground.

Uncle Stan and Aunt Karen give the young man his big break and Bud works his tail off around the campground, but every free second he is on the river, training under some of the best guides in Snake River history. With some 100 trips down the river and an entire summer of training without pay under his belt, Bud is asked to return the following summer as a river guide. He comes back the next summer, and the next, and the next. Around summer #3 Bud invites his girlfriend Kelly to join him and, of course, she falls in love with the river! (and maybe Bud too)

Kelly and Bud spend so much time on the river they see waves when they close their eyes and at the end of each day of rafting, as they walk around Town Square with their Haagen Dazs ice cream cones they think: Wouldn't it be cool to own a whitewater company? This is a picture of Dave four decades after the bravado incident and he is really catching some air! The new millenium finds Dave wanting to pass the paddle as the urge to grab the fly rod becomes stronger than the urge to grab the oars. Meanwhile, Bud and Kelly marry and have two beautiful baby girls. Perhaps it’s the fact their little girls like splashing around in the water more than playing with their dolls, or that Kelly feels the need to wear Tevas to work, but the river is always calling. Dave, Kelly, and Bud come together and all three see a great opportunity. Bud and Kelly buy the company with one essential condition they feel strongly about: the values and ethics of Dave Hansen Whitewater must remain intact and, in fact, thrive. We're all about respect and love for the river. We think an eagle perched on a tree or an osprey diving for a Snake River cutty is pure beauty. That the stillness of the early morning as the sun filters through the cottonwoods is pure splendor. We're all about a quality experience for our customers and not a rushed trip down the river. We value safety first and train guides who are not just Snake River guides, but guides who can read any river, who can get you laughing, and get you smiling. We think we’ll be the highlight of your trip. Thanks for reading our story, and we can’t wait to take you down the river! Hard to believe it was 2006 when Jackson Hole Mountain Resort liftee Kyle Vosmus decided to forego his homegrown Maine rivers and spend the summer on the Snake. Little did we know that he would start an epic DH pipeline of Hall of Famers from Maine that would shape the company like a Kahuna wave for years to come. 16 years and thousands of Snake River miles and soaked happy smiles later, Kyle has become one the backbones of DH. Our community is so lucky that he, and his equally awesome wife Ronnie (fellow Maine-er and stellar elementary school teacher) and their two awesome kids have rooted themselves here in Jackson. As GM of our operation, whether it's rowing a boat, driving the bus, or finding you a wetsuit, Kyle does everything at DH to make your trip with us the highlight of your vacation. With the last name of Vosmus and a zip code from Maine, we knew immediately that Keith was going to be an all star for Dave Hansen. Following in the footsteps of his brother Kyle, Keith guided the Snake through some of the highest river levels ever recorded. Through that invaluable experience, Keith rose from guide to Senior Guide to Operations Manager, all while helping DH rack up multiple kickball championships (along with his brother Kyle!). Keith plays the integral role of overseeing the training of all guides and drivers to make sure they are carrying on the Dave Hansen legacy. He and his wife Lily, a fellow DH Hall-of-Famer/Maine-er/Middle School Teacher, stay plenty busy with their two little boys, guides in training for the 2040 season.

"Super fun outing. Professional operation from start to finish. With so my outfits running trips down the Snake it is hard to know which one to pick. Save yourself the stress of trying to compare them all and just go with Dave Hansen Whitewater - you won’t be disappointed." Craig Anderson

"The whitewater trip was the highlight of my vacation. The river is the perfect amount of adventure and excitement for all to enjoy. The Dave Hanson team made it all great with fun personalities. I like the personal touches shown by this company." Kai Geller

"I am obsessed with the Dave Hansen Whitewater crew! Hannah at the front desk was friendly and very helpful setting up our white water! Our guide was knowledgeable of the area and a pro! He made everyone feel very safe and comfortable! Would highly recommend to anyone visiting Jackson!" Amelia Nolan

"The folks at Dave Hansen take care of everything! From the moment we arrived til it was time to go - we were in great hands!" Brett Saxon

"What an adventure! The staff were so helpful and our guide, Hunter, made our outing so much fun! We spotted lots of Osprey on the route and the scenery was just incredible. This was the best part of our vacation in Jackson. You won’t be disappointed if you choose Dave Hansen Whitewater." Matt Nickson

"What a five star rafting experience! Everyone was friendly, helpful, and knowledgeable. The bus ride tour compliments of Gene was fun and informative. McKenzie our guide was friendly and a fun teacher. I highly recommend Dave Hansen Whitewater Rafting!👍 👍 👍 " Karen Morrow

"This place seriously has the best staff that make the trip outstanding. They guide you through the waters and even provided lunch for us. The float is several hours and worth every minute! I am already excited for this summer so I can go again!" Wyatt Woods

"This was one of the highlights of my summer! Such a fun, exciting trip down the Snake River. Our guide Hayden made it enjoyable for all of us. Between his knowledge of the river and his enthusiasm for big rapids, the trip was a great experience!" Peter Elliott

"We had an amazing family outing with Dave Hansen Whitewater Rafting! It was a seamless process from check-in to check-out and great action photos to relive the whole adventure. We'll definitely be back!" Laura Romero

"Amazing experience and company! Highly suggest using Dave Hansen Whitewater! Our guide made it a fun and memorable trip. Also the owner is awesome and they truly want you to have a great experience! Don't look to any other company, use these guys when in Jackson Hole!" Corey Westra

"What an amazing experience! Everyone was extremely helpful and we could tell that their goal was for us to have a great experience. And we did! Jordan was our guide and he was great. He was very engaging and made it really fun. We would definitely use this company again!" Amy Horner

"The Dave Hansen Whitewater staff made our family rafting trip down the Snake River one of the best events of our vacation! Our guide, Grace, was excellent! Felt very safe. We loved every minute being on the river with her." Michelle Manwaring

"So much family fun! From the minute we walked in the door we were greeted with fun upbeat and helpful staff. We had Sandy as a guide he was funny, knowledgeable and really cared for our safety. I would love to come back for an all day trip. Highly recommend!!" Christy Grosz 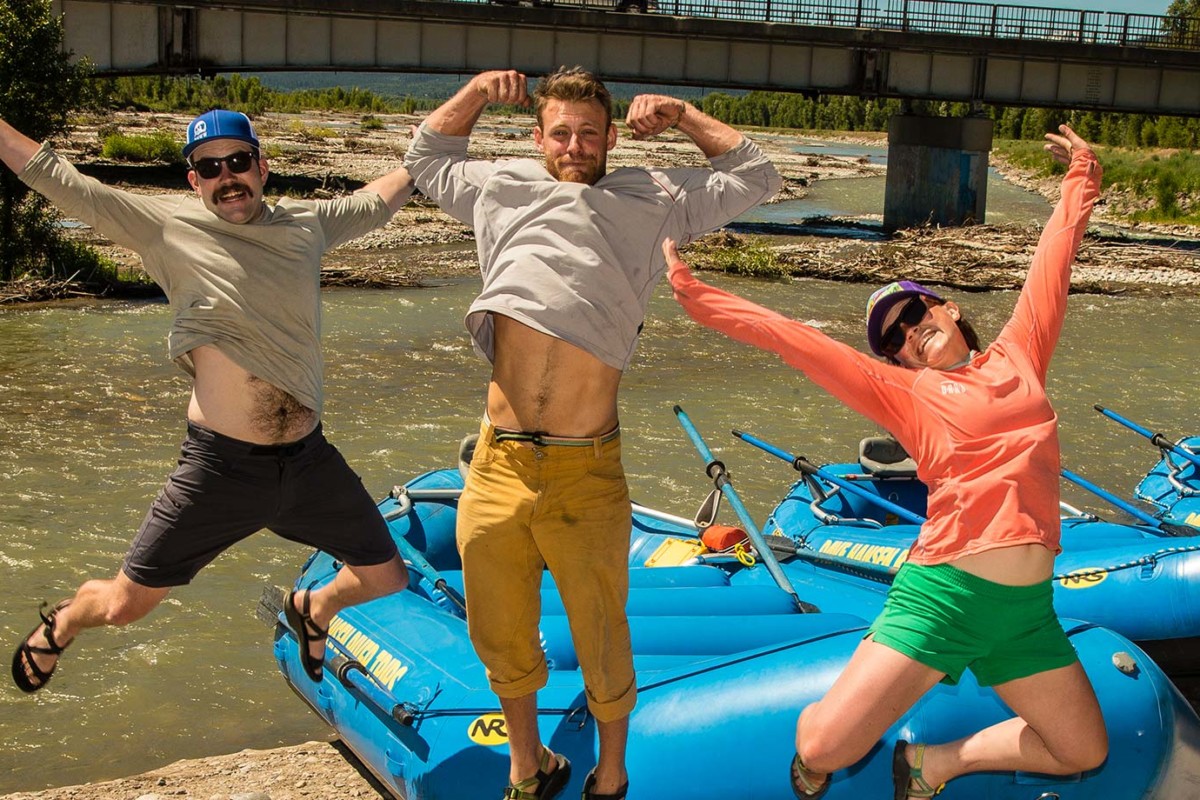